Be the first to review this product
Call for Price
*Price may change due to echange rate.
SKU
43346453464
Add to Wish List Add to Compare
Email
The Triton is a rugged and all-weather portable turn-key PTZ camera system. Its 30X HD day/night zoom camera provides both wide angle and long range capabilities with a horizontal field of view ranging from 62 to to 2.3 degrees. It has available SDI and IP ONVIF S video outputs allowing it to work over the internet with a VMS or NVR as well as legacy broadcasting and transmission equipment. It has integrated IR LED illuminators allowing it to see up to 50m in complete darkness.
Skip to the end of the images gallery

Skip to the beginning of the images gallery
Details

The Triton is a rugged and all-weather portable turn-key PTZ
camera system. Its 30X HD day/night zoom camera provides both wide angle and long range capabilities with a horizontal field of view ranging from 62 to to 2.3 degrees. It has available SDI and IP ONVIF S video outputs allowing it to
work over the internet with a VMS or NVR as well as legacy broadcasting and transmission equipment. It has integrated IR LED illuminators allowing it to see up to 50m in complete darkness.

Extreme Weather Vehicle Camera System
All of this comes in a rugged aluminum IP 66 −40° to +65°C enclosure that is low profile and weights under 2kg, making the Triton a clear choice for marine and vehicle rapid deployment for police, navy and militaries around the world.

Visible Optical Camera
The optical camera was designed and optimized for long range surveillance. It uses a 1/2.8" progressive scan CMOS sensor with an HD resolution of 1920×1080 and a fantastic signal to noise ratio of 55dB. 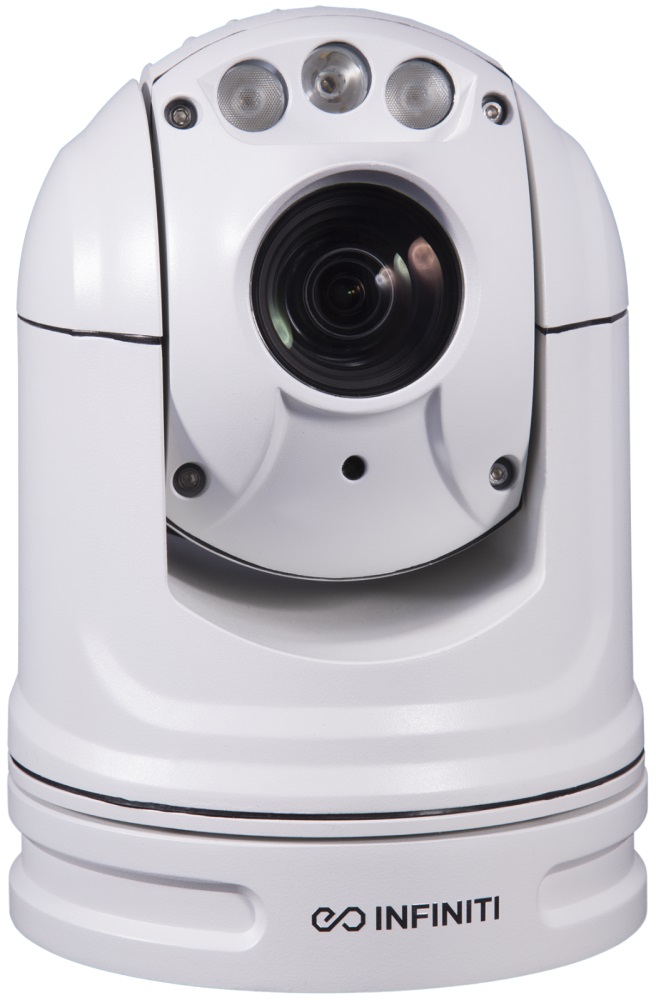 The 1/2.8" sensor has excellent spectral sensitivity for both visible and NIR wavelengths and features an automatic IR cut filter, making it a true day/night camera providing clear colour images by day and blackand white images at night. The 1/2.8" sensor provides the best balance between light sensitivity and maximum zoom, making it particularly suited for long range surveillance. The Phoenix also integrates the latest technology in real-time image processing such as BLC, HLC,
DWDR, EIS, ROI, 3D DNR, ABF, Defog/Haze etc. Each of these image enhancements can be automatic or user-defined and calibrated based on the application requirements. Since the camera is native IP, all of these settings can be changed and configured remotely, along with remote PTZ and zoom control.

Versatile 30X Zoom Lens
The 30X Triton comes equipped with a precision engineered 4.5– 135mm telephoto IR-corrected zoom lens offering continuous zoom from a wide 62° angle through to a narrow 2.3° field of view. The 1/2.8" sensor paired with the 135mm lens renders a field-of-view equivalent to a full-frame (35mm) DSLR camera with a 900mm lens. Infiniti’s
zoom optics are built with the highest quality Japanese fluorite ELD low dispersion glass, and the integrated rapid auto focus allows long range recognition and identification of targets without operator intervention. Infiniti’s HD Zoom camera is a perfect synergy between precision craftsmanship, state of the art sensor hardware and the latest image processing for unparallelled range and performance.

IR LED Infared Night Vision
The Triton’s 3 IR LED array provides up to 50m (160ft) of IR
illumination. The LEDs have integrated optical collimators that shape the IR light to eliminate hot spots and washouts, resulting in a more consistent and even illumination. An EPC (Electronic Photocell Control) automatically activates the IRs in low light, ensuring 24/7 day night imaging even in complete darkness. If required, The Triton can also be customised with military grade 940nm stealth that emits no red glow for more covert surveillance and reconnaissance.

See It All
Infiniti’s thermal cameras let you see further than any other night vision technology. Thermal cameras, unlike traditional visible cameras, use heat rather than light to see an object. Humans, animals, and vehicles are very hot in contrast to most backgrounds making trespassers hiding in shadows or bushes easy to spot. Thermal images are also unaffected by bright light and have the ability to see through atmospheric obstructions such as smoke, dust, and light fog. This
makes it an ideal technology for a number of applications, including but not limited to surveillance and security, search and rescue, fire, marine and land navigation, and wide area situational assessment.

LWIR Uncooled Thermal Imager
The Phoenix contains a GEN II VOx 17μm uncooled sensor with a resolution of either 320×240 or 640×480 and a sensitivity able to detect differences in temperature as small as ±0.05°C. The sensor’s no-maintenance VOx design, unlike ASI and other thermal cores, is self healing and resistant to solar damage.

Germanium GE Lens
We pair the uncooled VOx core with our precision-engineered
26–75mm germanium zoom lens. Our germanium optics boast
an industry-leading f1.0 aperture, compared to most others at
f1.6. This means they allow more thermal energy to reach the
sensor, further increasing its range and performance.
Extreme Long Range Detection

The Phoenix is a Long-Wave Infrared (LWIR) camera which
means it operates on 7,000nm–14,000nm wavelengths where
terrestrial temperature targets emit most of their infrared
energy. Using our 25mm f1.0 lens and the built-in Dynamic
Image Contrast Enhancement (DICE) for increased contrast
and image clarity, this system is capable of detecting vehicles
up to 2.5km away or humans at distances up to 750m.* While
thermal is a significant investment, its superior range and
performance allows it to replace and outperform other
solutions, making it a viable option for many applications

Pan-Tilt Resolver
The heavy-duty PTZ driver is designed for extreme performance in the most demanding applications. It features endless 360° panning and Micro-Step technology for precise pan and tilt positioning with speeds of 0.5°–80°/sec. Advanced features, such as preset and autocruise,
will complement almost any existing equipment by means of Pelco-D and Pelco-P protocols with optional absolute positioning. ONVIF IP PTZ Solution Although the Triton is an extremely sophisticated piece of equipment,
it is operated by an intuitive, user friendly interface with multiple control options such as touch screen and mouse. It can also be controlled by a 3-axis joystick via Pelco-D or web client and is simple to operate without prior training.
The Triton is a IP network video camera system that utilizes the latest

ONVIF Profile S protocol, allowing the video to be distributed over wired, wireless and cellular networks. ONVIF ensures integration with the widest range of NVRs, VMSs and video storage and devices. IP allows for real time control and configuration of the cameras allowing you to optimize the camera from anywhere in the world. View all of your cameras instantly and remotely, and control them through the internet in real-time from anywhere in the world using
Ascendent Remote Management Software (ARMS) on your laptop, iPhone, or Android device. Internet is often limited to low bandwidth satellites which is why we allow for dual steaming so you record at one resolution, stream at another, and have integrated VBR and CBR to manage the amount of data and bandwidth used by camera so
that optixe the camera for the limitations of the network.

Designed for Mobile
The Triton is designed for maximum portability. It can be mounted upright or inverted, weighs under 5 pounds, and has a low power draw. It can be configured with an optional magnetic mount for easily securing on vehicles. It also can be built into a Rapid Deployment Kit (RDK) that includes, power, wireless networking, recording, display and tripod to create a complete integrated rapid deployment solution.
This camera is designed to be the ultimate mobile solution for marine, military and law enforcement and can be used both autonomously as well as part of a larger solution

Reviews
Write Your Own Review